Surely, I thought, this must be parody. But I was wrong! 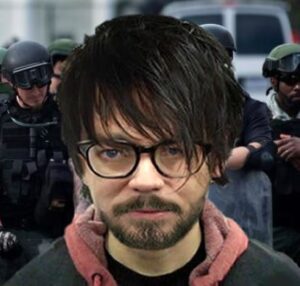 In support of the Left’s new defund-the-police mantra, Godfrey Elfwick wrote (June 9, 2020) the following paragraph in the article titled “Imagine No Police Force” in The Spectator, a 192-year-old British journal:

I’m hearing inane questions such as ‘But what if my house is being broken into by an armed attacker?!’ Well that’s simple. In a community-led system of law-keeping, you would call the number of your allocated Peace Officer and explain clearly, and without prejudice towards the defendant, what the current situation is. Be sure to alert them to any possible reasons the robber (or ‘wealth distributor’) may possess to have been forced into a life of crime. Perhaps they come from a broken home? Maybe their minority status has caused them to feel disillusioned and understandably upset by the systemic disparity of wealth brought on by white patriarchy? Is it possible that their lived experience has led to a life of substance abuse which has spiraled out of control? Remember to not make racially-stereotypical assumptions about this person, and instead see if you can open a dialogue in order for them to be able to state their case without fear of being judged. Once you have passed on this information to the Peace Officer, they will immediately put out an alert on social media for other citizens in your area to send their thoughts and prayers to you at this difficult time, while also taking care to offer support to the wealth distributor who has been conditioned into breaking into your property by the multi-layered inequalities inherent within Western society.

Isn’t that amazing? Can you see why I thought this was a parody?

This can only lead to a gradual shift in attitudes, as people become more inclined to accept that being robbed, or physically attacked, or raped, is simply a consequence of years of colonization and white privilege. Dismantling the police force will likely uncover many deeply ingrained issues lurking beneath the surface that decades of prejudiced cops were keeping stifled, and allow society to see them more clearly. A police force is like a tightly-wound bandage covering a wound that can only be healed by allowing it access to the fresh air.

I have two comments for Mr. Elfwick:

First, why not run a field trial now and let us all know how it goes?

You don’t need anyone’s permission. Recruit some fellow Leftists, designate some “Peace Officers”, and let it be known that all of you pledge not call traditional police departments if anyone breaks into your homes or apartments. You might even design a logo for your ‘woke’ program and post it with pride outside your domicile.

Second, try to get your comrade Leftists in the United States Democrat Party to actually campaign on this Imagine No Police Force theme.

You can start with the Democrats in Minneapolis where the Town Council has already voted to defund and dismantle their police force. It sounds like a real Democrat vote-getting strategy for 2020.  Why not let them help you prove that?

4 replies on “Imagine No Police Force”

Wait. Being “raped, is simply a consequence of years of colonization and white privilege…”?! How about other base inclinations or appetites? Sodomy, female mutilation, human trafficking, child slavery, anyone? What if the victim is a disabled minority transgender black woman? Will she not be afforded physical protection either?
These idiots should keep rioting for the nobility of such naive goals, because the rest of America–where we live in the REAL world–will reject them outright and quick. You want more Republicans? Keep rioting, looting, and espousing stupidity like this!

I do hope more people start to wake up and smell the coffee, hell it’s time for a new pot even this one has been on too long…

Dear God in heaven, please tell me this is satire?! Surely no sane person would believe this? This can simply not be real. No one is dense enough to believe you can sit down with an armed invader and ask them to give you their life history. Sir, did your parents divorce when you were young? Did your parents even marry? Were your parents addicts? Are you addicted to an illegal substance? Did you have a male influence in your home? While they ransack your home, rape you, at gunpoint? I am absolutely positive they would sit down an talk with you, answering all your questions honestly, so you could relay the conversation to the social counselor one the other end of the phone you are using to call for assistance! While covered in your blood.