Fox News Channel viewers have long been familiar with civil rights attorney Leo Terrell. He had been a long-time ‘liberal’ foil for Sean Hannity and other FNC anchors. Angry and argumentative, he often interrupted other panelists with his bombastic rhetoric. To a conservative ear, Leo often sounded desperate to defend the indefensible.

A few weeks ago, Mr. Terrell underwent an abrupt red-pill conversion. It started when Joe Biden infamously said “… you ain’t black” followed by the Leftist Democrats’ (there’s another kind?) launch of their preposterous Defund-the-Police / Dismantle-the-Police initiatives.

That did it! That was a bridge too far. Suddenly, logic and sanity prevailed over Leo’s defense of a Democrat party gone horribly wrong.

In a matter of days, Leo has launched several powerful screeds supporting law and order as well as becoming brutally critical of the Democrat party’s history of exploiting minorities for money and power.

Hear some of Leo’s most compelling rhetoric in the video below.

Welcome, Mr. Terrell! I’m delighted that you appeared with Mark Levin, and I hope to see soon that you’ve linked up with Candace Owens and her #BLEXIT (Black Exit) movement.

Oh — and one other personal note: Since your epiphany, I’ve finally seen a couple occasions when you dropped your trademark scowl and smiled. And that’s another welcome change! 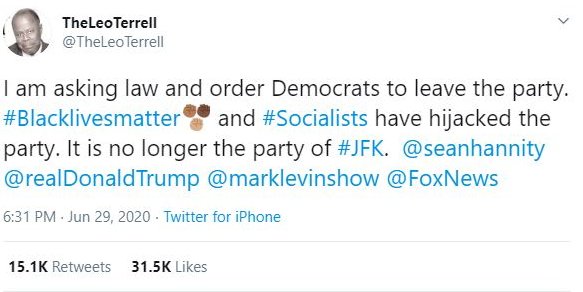 David, I watched this exchange with Leo Terrell and I don’t think he took a red pill but realized that his life-long party had dissolved into a Marxist force that will result in enormous damage to the Black community. His screaming to his fellow Blacks – STOP DRINKING THE DEMOCRAT KOOL-AID – was prophetic.

Thanks, Jim. The change in Leo (now called “Leo the Lion”) is so dramatic that it crosses my threshold for “taking the red pill!” 🙂

Leo
Am I the only one that has noticed you look YEARS YOUNGER.
You are always so passionate at whatever you work on – but you no longer look like you are in pain – as you did before you changed your outlook.
It is a real pleasure to hear you make your passionate points on the truth.
And you seem to be even more effective as well.
Thanks for helping the truth prevail.
Congratulations
Good Health & Happiness
Jim