Nothing is more precious to Israelis than their children. When Palestinian terrorists took over a school in 1974 and murdered over 25 hostages, what did the Israelis do?

Did they post gun-free-zone signs in front of their schools and pat themselves on the back for their tough stance?

Did they attempt to ban or confiscate weapons from their law-abiding populace?

Did they attack organizations like the NRA that promote skill and safety among gun owners?

Did they adopt “zero-tolerance” policies that suspend 2nd-graders for chewing a pop-tart into the shape of a gun?

Did they require that all teachers carry firearms?

Nope. None of the above. 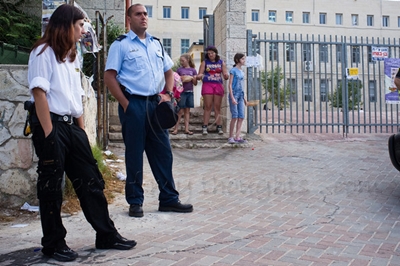 They focused directly on the problem at hand — namely, school safety and protection for children. Here’s what one Israeli security expert, Oded Raz, had to say:

First, you must decide that nobody — nobody — enters the school without permission. Second, you must locate security guards. It can be the local police or parents who volunteer.

Usually there is only one place, one portal, to enter a school in Israel, although a large school may have more than one portal. But all portals are protected by guards. And the schools are checked and cleared every day well before students arrive.

Are there any guns in the school? Yes, but they’re not required, and teachers who carry them usually do so discreetly with the knowledge of the school.

From what I know of almost all of the active shooter events in the U.S., almost all of them conclude with the shooter taking his own life the moment he is challenged by the first officer on the scene. Why not challenge him earlier?

So what have the results been like in Israel?

Not a single school child in Israel has been murdered by attackers in over 40 years. There have been two attempts, but both ended with the attacker shot dead by armed guards. That’s called deterrence, something that hoplophobes cavalierly dismiss with “more guns are not the answer” before attacking law-abiding gun owners and the NRA yet again.

Attacking the NRA for school shooters is like attacking AAA for drunk drivers. But it’s been easy for the grand-standers, and it’s a great distraction from the real issue — protecting our children’s and grandchildren’s lives. So our virtue-signaling, demagogic politicians, who know next-to-nothing about school security, keep on attacking the NRA for the cameras. And our legacy news media are sadly complicit. Instead of news about methods that work, the debate is about bump stocks, barrel shrouds, and AR15 bans.

But there are rays of hope — to their credit, schools in Colorado and Philadelphia have hired Oz’s firm (Shafran) to survey schools and recommend a design for security.  And the NRA offers free consulting services on school security.

While know-nothing politicians keep preening, virtue signaling, and out-gassing their talking points, at least there are some serious adults, somewhere, who are trying to make a positive difference on school security.

David Leeper, I think this is the first correct explanation I’ve seen in print yet from someone in the US about how we in Israel keep our schools safe.

We have a strong fence around the entire school property and only one way in, and that is to walk in, past an armed guard, who will not let you in until he receives clearance from the office to allow you to get past him, after he unlocks the padlock on the gate. His guard booth has a phone in it for such coordination with the school’s administrators. He also has a clipboard for signing “guests” in and out, using their names and their picture IDs (we carry these on our persons at all times). If there is a need to quickly evacuate the school building (e.g. a fire drill) the students can leave the building in a hurry from multiple exits at once, but then they still remain safely on the property within the fences surrounding the building and playgrounds. At the beginning and end of the school day the parents can escort their kids up to the gate, but no further as the kids stream in or out, as the hour dictates. If a kid has a reason to leave or arrive at off hours, the office needs to be made aware so they can expect it and inform the guard. As you wrote, there are no other guns on the school property, unless some of the staff quietly have them for reasons of their own and not for the reason that the school assigned weapons to them. And with this set-up, no more weapons are necessary. With all these safeguards in place, anyone contemplating mayhem is strongly deterred before s/he can act because the chances are quite slim that they will meet with much if any success.

We have similar set-ups at shopping centers, malls, banks, theaters, restaurants, underground parking garages and outdoor entertainment venues: i.e., safe perimeters, limited access, with an absolute minimum number of armed guards (most often only one) in position at each entry point.

We have much to teach the world from our own example, and we have had to learn to adopt these methods the hard and painful way. If you want not to have to go through the same learning curve we had to, to get where we are, then let us teach you. Otherwise, you will just have to figure it out in your own good time (if you ever do) at a cost you did not need to spend.

Knowing I am surrounded by these well-thought-out safeguards wherever I go in this country gives me a sense of security I can only wish upon you there. I am actually pleased and not intimidated by the delays these safety and identity checks cause when I enter such public places. Because I know that I and everyone else, including my kids and grandkids in their schools are safer for it.

An anecdotal aside. I was visiting in Manhattan during the Christmas shopping rush a few years ago and I noticed there were guards at the doors to the crowded department store I entered, just like in Israel. But, it surprised me (shocked me) that they just let me walk right in without even a glance. Why? Because they were busy checking receipts as the shoppers were leaving. They were not there to keep the shoppers safe from harm, they were there to keep the merchandise safe from shoplifters. That was such an incongruous experience for someone like me who has lived in Israel so long, where life and limb is valued far above anything else.

So good luck America. I hope you find your way sooner rather than later. We will happily share what we have learned, if you aren’t too embarrassed (or proud) to ask.

The last part made me shiver.